I wanted to step in the reflected chalcedony sky, edged by sharp leaves. I just forgot that the reflection isn’t the real sky.
I wanted to break this autumn silence so much that I've forgotten that I’ve never had any wings to fly. 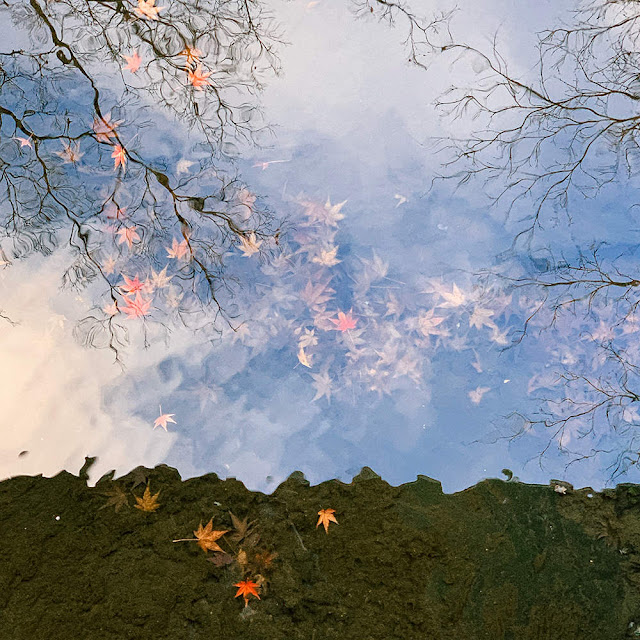 I can't believe that two years have passed since I posted something here. Well, the main idea is that I'm still learning Japanese. My current grade is N2.. well, I don't know if I pass my exam in three weeks but still. If I do, I will have the grade I can start my work in Japan.
I'm curious how many languages can one learn during his life?
I completely forgot Portuguese and French. But I actually can speak Japanese. As for English, now it's still not as perfect as I want, but I have enough knowledge to communicate and read in it. Also, I learnt Japanese using English sources, so I believe that it became "my language".
I just don't know why do I continue this blog.
Perhaps, it might be interesting to re-read in few years. "Oh, look at her, when she wrote this she didn't speak English well and had no idea she would learn Japanese hahah" or something like this.
Never mind.
Sometime I just feel that it is the only proof that I lived.
Автор: Antarien на 16:34 Комментариев нет:

Fry's English Delight yet again. I can't help listening to it. Two years ago, four years ago, seven years ago... I found it when I had to pass my phonetics exam, because the only chance to pass it was listen to someone with the perfect pronunciation again and again: I had missed all the phonetic lessons in that term so I had no chance to pass. But I did it.
Two years ago I had to create american apple account since there were no new series in russian app store.  Today I found out that series 9 has arrived. But it's unavailable even in US appstore :( actually it's available nowhere, so there's no chance for me to buy it.
Who knows, I might not have learnt English if there were no English Delight and Harry Potter narrated by Stephen Fry. And definitely I wouldn't have know many interesting things about the world, life and languages.
If I could I would say "thank you for the inspiration you gave" to all the people who worked to create this podcast, and Stephen Fry personally.

/Perhaps I'd better write something that had more sense, not just common words but you see, these days I'm in the process of learning of a new language, so it's a little bit difficult to cope with two of them in my mind. Anyway, this podcast is a thing which makes me believe that we can do anything we want, seven years ago I could hardly imagine I would speak english fluently and travel around the world, there were just dreams and no idea how to make them real. Now, I'm strong, I'm able to do what I want to do: travel, learn new languages, take photos and write small stories for my friends.. /

P.S. new language is japanese. I'm not crazy, I just enjoy learning languages. It's not as difficult as I thought. On July the 2 I'll take my exam to the first level. I'll pass it.

Do you like geometry as much as I like it? If your answer is yes, you'll definitely enjoy this entry.
I think abstract and architecture photos are the best I have. To continue my traveling story I must start with Czech. However it was during new year holidays, so I lost the moment. Now I'm in Malaysia, having work trip. Could I imagine something like this three years ago? The answer is no.

I don't remember if I wrote about my new portfolio site, so just in case:  http://antarien.photocentra.com

I don't know if someone reads this blog, but if you do, please let me know, because I'm feeling so lonely. Especially now, when I started traveling, the whole world seems so small. I need some feedback from the reality because I'm not sure about my presence in this planet.

At long last I created an American apple store account because I wanted to buy new "Fry's English Delight" series (they're unavailable in Russian store). However, it was me, who bought them, that's why I got a bug. I've been communicating with apple support for already two days for nothing.

As for news, I was in Vilnius last month, took some minimalistic photos and had a great pleasure being there. I'll show photos if I don't forget.

This month I provide our Malaysian colleagues with trainings. Yesterday I explained them how to use  Chinese interface (in English of course, as I know neither mandarin nor Malay). Actually, it's a typical situation for me "somehow explain something you don't know to someone who don't understand" :D

However, turning back to the beginning: all I want now is to get my English Delight series and disappear to Prague as I was going to. Two working days left before my vocation and holidays.

I got lost in Bray yesterday. Guess what was the place I found myself? Fairy Hill! So, where it is: Ireland, Wicklow, Bray...

Ireland is amazing, you know. When I dreamt about it I could hardly imagine how wanderful it is. I want to have an extra pair of legs to walk around all the places I'm interested in. I'm in Bray ow, guess that it's the most beautiful place around the Dubling. Yesterday we had a bank holiday and fireworks, so I want to share one of my pictures from yesterday.

Too busy to be alive.

You’d promised that you’d never ever been like one of those who forget. And there is nobody to talk. Or perhaps you just don’t have anything to say this world. Having abyss in the mind and soul, nothing else matters. Spring in Moscow is wonderful this week. Actually it is my best favorite season.
Let me show you some photos. This is Kolomenskoye homestead, one of the best places in Moscow to my mind. Among many other places, of course. I wish I could walk more to take more photos of the city.